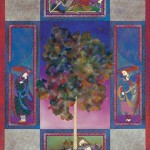 Love and Death from” Shahnameh” Series 110x 75 2007 gouache on cardboard Participated in Bonhams Auction Love and Death from” Shahnameh” Series From the collection “Destiny of Shahname Women” Beautiful, daring Princess Tahmine suddenly found out that luck had knocked on her door and her unseen lover had been sleeping in her house. She went to Rostam’s bed in the dead of night, and they both lost the gamble of love overnight; a passionate love, a brief encounter, followed by continued departure. Blossoming bud is a symbol of the conception of Sohrab. Tahmine is lying in Rostam’s arms yearning to have a child from him, without even knowing that the one who gives her the child will take it back. This refers to a termination of matriarchy in which a son is searching for his father, because neither knows the other. The son gets killed by his father in a tough battle. The work is divided into four sections, indicating four elements in nature. The images on the top and bottom of the painting depict the love between Tahmine and Rostam, and Sohrab lying in Rostam’s arms, portrays a mirror-like reflection. Tahmine is in a situation similar to that of Sohrab. In effect, she was devastated the night when she lovingly went to him, for she lost the child that intercourse gave them. Satan and angel are watching the scene from either side of the painting, as if they are audience of a play. Bloody sword of Satan indicates that evil is triumphant and angel has sadly surrendered. Struggle between Ahoora Mazda and Satan, good and evil, and light and darkness, still continues. Whether goodness wins or loses, an evolution is the result of this struggle. The tree of wisdom will grow in the same soil that embraces Sohrab as a seed. Circumstances of a hero are often recounted in every struggle, but this painting describes untold sentiments of a heroine behind the scenes of a war. 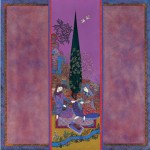 Being in Heaven ,Being in Hell Triptych 75×35 75×75 75×35 2007 gouache on cardbord participated in christies auction Two lovers are seen in the middle panel in a Heavenly setting and just as the nature, are quenched by the spring of love. The pink sky, the blue river, and colors of landscape are reminiscent of traditional miniature paintings, denoting a sublime world. A man and a woman, burning in the fire of estrangement, envy, and sorrow, are seen in the paintings on either side. Each one of the happy couple is the deity of the other. If two people are happy, perhaps two others are sad because they have lost the very same status. If someone achieves love, a status, or a joy, it means that someone else has lost or failed to achieve that love, status, or joy. Geometric composition of this triptych puts major emphasis on the middle panel. Similar to other works of the painter, time and space are employed allegorically. Various symbols designate different meanings. 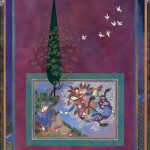 Creation of man Michelangelo Gouache on cardboard 110×75 2007 Participated in Sotheby s Auction Creation of Man From the collection “Commemoration” Homage to Michael Angelo This work is inspired by Michael Angelo’s famous fresco work, Creation of Man. The goddess (Izad Banou) and small fairies, who have surrounded her in this painting, initiate human life on earth. From an Iranian traditional standpoint, women are symbol of life, abundance, fertility, and wisdom, for they always give birth to man. A majority of religions that have been practiced in Iran absorbed customs and concepts to compensate the great lack of essential mother figure – or a female element – in their sacred writings. Even Zoroaster took a compensatory measure with regard to the mix of angels. Cypress in this painting is a symbol of a proud future and everlasting youth of a man who is given a new life by a woman. Buds depict birth and his renewed conception. Similar to earth, woman is a symbol of blessings and acceptance. Whilst she gives life to man, she embraces him again when he is no longer alive. The painting refers to the age of goddesses and archetypes of the past. They still can be found all across the world giving birth to men. The clouds surrounding the goddess symbolize fertility. In its composition, the painting shows night time with stars and day time with the sun. There are also birds transmitting different messages. And creation still continues … 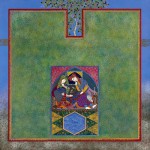 Participated in bonhams auction HONEYMOON 75X75 GOUCHE ON CARDBORD 2008 Honeymoon This painting challenges the question of honeymoon at the start of a sweet life. Composition of the painting is inspired by traditional Persian painting as well as Iranian Kilim and Kaba. Divided forms of the pond and orchard within the plane of the painting indicates veiled geometry in Islamic art. Colors, position of figures, minute details, and motifs serve to depict a world full of kindness, joy, and hope. Two lovers cuddled at the center of the painting are in a green surrounding which connotes a garden. Their dreams, in the form of a nest, can be seen among the branches of a plane tree on top of the painting. Plane tree itself is a sacred and precious symbol in Iranian art. In the background, an open window looks at a starry night.. There is festivity and drinking, and unaware of the future, the two lovers are looking at the two birds. The two birds are encaged in a golden cage looking back at each other. Many stories have a happy ending when the two lovers marry each other. In real life, however, stories begin right from that moment. Which one will be the end of this sweet beginning? The nest or the cage!? 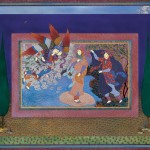 Participated in christies auction Birth Of Venus 75x 110 2007 Gouashe on Cardboard Venus, goddess of Love and Beauty, came into being from the foaming sea. Born out of chaos, Venus danced in the sea and upon reaching the seashore, saw plants grown under her feet. And she finally flew to the skies along with birds. Inspired by Angelo Poliziano, poet of the Renaissance period, who himself was inspired by Homer’s poem about Venus, Sandro Botecelli painted the Birth of V enus in the style of antique sculptures in 1480. Venus, emerging from the sea, is standing in the center of the painting on an enormous seashell, covering her nude, supple and dream-like body with her long hair. Her shell is pushed to the shore by the west wind of Zephyr, who is embracing Chloris, amid a shower of rose-colored flowers. On the right, goddess of Law and Spring is approaching Venus with a purple cloak embroidered with red and white daisies – to cover her naked figure. The Birth of V enus expresses great hopes of the Renaissance period for the rebirth of humanity. Inspired by Botecelli’s Birth of V enus and old Persian painting, Farah Ossouli depicts contemporary Venus. Venus in her painting, fully dressed and covering part of her body with a scarf, is standing on a shell. Astounded by the birth of Venus, Chloris and the west wind of Zephyr are standing by on the left and flowers are replaced by clouds. On the right, a man is spreading a blanket (patterned with stars) over Venus, thus symbolizing darkness, concealment, secret, infinity, and disguise. Geometric divisions of the painting illustrate primordial and perpetual sequence of day and night and continuity of life in various layers of time and space. Cypresses represent youthful pride; buds symbolize spring and rejuvenation. The moon is illuminating the sky and the river denotes the passing life. The sun is making appearance from behind the clouds and birds are on the wing in the upper part of the painting. According to mythology, Venus will eventually fly to the skies along with the birds.

© 2023 - All rights reserved for Farah Ossouli. Design and Developed by Farabar.com